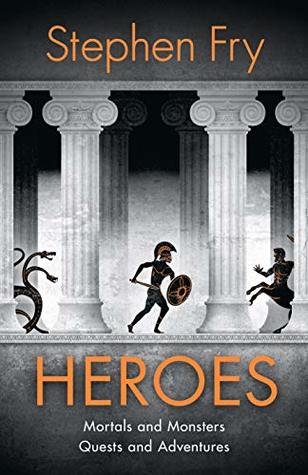 I feel like Stephen Fry could make any book better. For instance, I don’t really like Greek Mythology due to it so overused in media that it feels more common than my native. But “Heroes” was a marvelous and very fun book that rekindled my interest.

About the Book: The Age of Heroes began, it seems, suddenly. Great people began cleaning out the world of monsters, curses, and scary things from scarier places, making it nice and proper for us to live in. They challenged the gods themselves, took up quests, adventures, solved riddles, and invented things we to this day use. And we ourselves took delight and joy in telling those tales, to our friends, to our children. From Hercules, to Orpheus, to Argonauts, to Icarus, and many, many more.

My Opinion: This is a fascinating piece. Stephen Fry does a great job explaining chronology and errors in it, overlapping and such. He does his best explaining us the relations among people too, how were they connected, who sired whom. The book is well written, tales are told in this light, easy fashion, with comparisons and descriptions fitting our modern world. In fact, once or twice I laughed out loud at some of those. Audiobook is great too, so if you’re new to them, or have troubles getting into them, Fry’s mythology books are a great start point.

Yep, it’s a great book, I give it a 5 out of 5, for making even such a seemingly dull topic – great. (I’m sure it’s not dull, and this is merely the perception of someone who had to study it all in school) 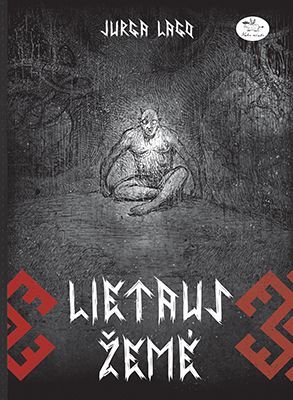 After reading Norse Mythology and Mythos, and then playing Hellblade: Senua’s Sacrifice, where the main character is a Pict (North Scotland) warrior who ventured into the underworld to fight Hela herself, I needed more myth retellings in my life so bad. So one day, as I was in the post office, doing my thing, sending stuff out, my eye was drawn to the little shelf they have there for books. I knew nothing of the author, nothing of the book, but the artwork style on the book, and the title told me I need to have it. So I got myself “Land of Rain” by Jurga Lago (Lietaus Žemė; ISBN13 9786094413476; 184p.; Goodreads), and I was never more happy with an impulse purchase ever.

Lietuviai and Zemaiciai have fought among themselves for so long, that our Thunder God named, well, Thunder, Perkunas, sent an ever lasting rain upon the land. It would pour until these two Lithuanian tribes finally made up. So, pretty much, forever, for neither side knows nothing else but how to hate the other side! From young age folk are conditioned with stories to feed the fighting spirit. And one of the fiercest among the Lietuviai was Siurbele (Leech). He, as many other old men, still remembered dry days and sunshine. But ever since Lietuvio son has disappeared soon after birth, his fighting spirit cared for no forgiveness, and he wickedly helped those dwindling armies collide, clash, and slaughter each other. During one such battle he was about to escape to safety when he found himself drowning in a bog called Black Honey. Making peace with his gods Siurbele got distracted by a child. Scrawny, thin thing with a lisp. He claimed he knows a path out of the bog, and will exchange the information for a couple of fishies. Small price for a life, Siurbele thought, and agreed. In fact, he felt so sorry for the poor child, that he gotten him to a farmer, and being of infamous name, had that one guarantee a livelihood for the kid during many winters to come.

One rainy night, as all nights were, one of the shepherds returned weeping: a water piggy got lost, and the master will surely beat him to death for it. Zaltys (grass snake), for that was the name of the kid who saved Siurbele, told the kid to calm down, and went to search for the piggy. Being kind-hearted, he didn’t regret finding it, even if it was at the feet of the Devil.

Now, mind you, in our mythology Devil was no friend to Perkunas, and Perkunas was sort of like Thor: An eldest god below his own father. But he wasn’t an evil creature. Mischievous – maybe. But absolutely not evil.

The Devil spoke a bit, corrected Zaltys every time he lisped a word, until the boy stopped lisping, due to magic the being wielded, or the sheer terror he induced in the kid. And finally agreed to give the piggy back. In exchange, Zaltys would go to Zemaiciai. What for? Well, that remains to be seen, Devil said. And so, the very next day Zaltys took off, through forests full of godlings, beings, creatures, beasts, talking lakes, and gods themselves. He knew enough to survive, being raised by one of the Wise Men, and likely there was no one prepared for such a journey better than he. As much as he didn’t wish to go to a mortal enemy who’d likely kill him on spot, not caring one bit that the Devil himself made him come, and he meant no harm.

Zemaitis, in the meantime, had a daughter. Sure, he wished for a son to take his place, but what can one do? The girl, Lyja (Raining), was raised among the soldiers, and soon enough had no equals with a bow in the forest. Still, as fierce as she was, her father saw her as a girl only suitable for kitchen work, thus when final battle came, he had to leave her behind. And well he did, for in the dark of night, with no soldier and only old or dying men around, Lyja was the only one who had the strength and bravery to face the stranger who knocked on the door.

The story is VERY good. I’d say it’s like Sapkowski’s Witcher, but in our boggy swamplands. I loved it a lot, and I wish it was translated to English, so everyone could enjoy this beautiful mythological story. 5 out of 5, well deserved.

Stephen Fry “Mythos: A Retelling of the Myths of Ancient Greece”

If you liked Neil Gaiman‘s “Norse Mythology“, you will absolutely love Stephen Fry’s “Mythos: A Retelling of the Myths of Ancient Greece” (ISBN 0718188721; 416p.; Goodreads) too. After reading both of them, and incidentally playing Hellblade: Senua’s Sacrifice, I hope one of these two will write more myth retelling books.

As title and my rambling suggests, this books is all about dem gods, mythological beings and creatures, and their stories, how they came to be, what’s their origin. All those mighty beings roamed heaven and Earth alike once, and caused quite some ruckus doing so, for they were just like us. Spiteful, jealous, silly, ridiculous. One of my favorite examples would be story or Arachne, whose woven things were better than those of gods themselves. Knowing how cruel can offended gods be, Arachne was prepared to die, for what is life if she cannot weave . The goddess whom she beat in this art saw the distress and knew what caused it, so instead she did the best she could, and turned Arachne into ever weaving being: a spider, so she could knit webs for an eternity. I don’t know if that’s the case in the actual myth, but from what I did know, this story was the only one that had a positive vibe to it that I did not expect to be there (for there were plenty of positive stuff, and if only I could remember one…), for the goddess thought of this as a gift, not a punishment, it seemed. Add Fry’s good humor to these stories, and you’ve a glorious book.

I can’t recommend this book enough. Same goes for Neil Gaiman “Norse Mythology”. Brilliant book worth a spot in the shelf, 5 out of 5.