book review | Bored of the Rings by The Harvard Lampoon 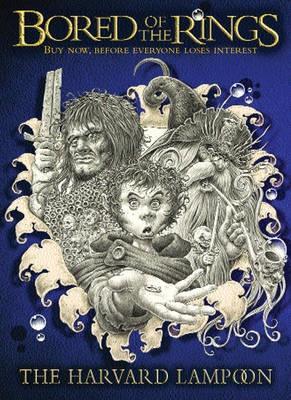 I got this book from second-hand store in UK about forever ago. And since “Bored of the Rings” by The Harvard Lampoon (Cardboard box of the rings 3; ISBN 0451452615; 149p.; Goodreads) is such a small book, it traveled with me for a couple years. I just thought, hey, what if I don’t have my e-reader with me, my phone is old, battery doesn’t last, etc. But that didn’t happen during all that time, so I just took it out and read it at home. And it wasn’t good.

As the title suggest, this is a parody of Lord of the Rings. Absurd kind of humor, which is very much not for everyone, and very much not for me. It felt childish and tasteless majority of the time, and there wasn’t a damn joke I found funny, which is disappointing, because I like funny things, and I really wanted funny things, that’s why I got the damn book in the first place.

Anyway, Frito gets his heirloom One Ring that can rule all the others, at least those that weren’t lost or recalled for manufacturer errors, and thus now has to go on an adventure to destroy this evil thing. The voyage is scary, so first one has to form a Brotherhood, but, really, no one wants to go on this dumb trip, so they just push one another forth, until no one’s left and a Brotherhood is formed out of offered up men, not volunteers. Really, no one wanted this adventure.

I can give this book a 2 out of 5, for at least it was well written. Other than that, the puns didn’t work, the jokes were childish and not funny, and the dirty stuff was just tasteless. Not for me. For someone maybe tho, because humor is really a personal thing.

Ah. It’s been a long time, fam, since the last time I’ve read a third book in the series, not realizing there’s the first and the second before it. But here I am, in the Age of Goodreads, with “Rich People Problems” by Kevin Kwan (Crazy Rich Asians 3; ISBN 0385542232; 398p.; Goodreads), third book in the series, or trilogy, I don’t even know. Must say, it was pretty good. Not the best of the best, and neither the funniest in the genre or, well, in general. But it was amusing, and I think I will read the other two too.

Shang-Young clan is a mighty and wide family, with each child and grandchild on one path to greatness or another. Some married as class demands, and are now as good as royalty, sporting pretty ridiculous titles, and demanding to be treated with full protocol. Others pursued love. While in rare cases it didn’t bring much money, most were still happy. With more commonly the children of these love marriages being bitter about not being anyone of importance, virtually nobodies, in the thick cream of Singaporean somebodies. And of course, there are those who had falling outs with the family, society, or just chose too extreme a lifestyle to be part of anything Shang-Young related. All up until they all ended up united by the deathbed of their beloved mother and grandmother, Su Yi. After a heart failure, this might truly be the last time for them to be with her, and possibly – make it up to her, and get into that lavish will…

Su Yi has a chance to set her records straight, now that the sudden heart failure has rendered her sort of free, and with majority of the family – at hand. Thus, behind the backs of loving and/or greedy children and grandchildren, she pulls at her strings. With the help of the loyal servants, whose faith is in her hands too, she intends to give blessings where blessings are due, forgiveness where such is needed, and her own apologies, in hopes to see the most loved ones return to the flock. After all, it is those latter ones she needs to entrust with her biggest secrets, and she has plenty of those. Granny Su Yi will make peace, and make them make peace too!

It’s an amusing read. The main, or rather the general story is pretty plain, and average at best, but the exaggerated stuff was fun. The whole famous rich bloggers from Singapore, the half-white children, the dresses with gold plating, sabotage of enemies, and the terrible need to hide any possible lack in every possible sense. The ridiculousness of these people was what drove this book for me. So I can happily give it a 4 out of 5, and, I guess I’ll read the other two too.

I feel like thanking so many people and so many circumstances that led me to this book. I assume that the dumb smile it left on my face basically means one thing:”An Unattractive Vampire” by Jim McDoniel (ISBN 1941758649; 309p.; Goodreads) is one damn good book. Never have I laughed so much out loud.

Yulric Bile is an ancient saxon vampire, a master of survival and deception, a true evil mastermind of the kind that was neither pretty, nor good. The type that does not get “sired” or “created“, but rather is too evil to stay dead. He lived this long thanks to his cunning, and, of course, immortality, so when an angry mob with pitchforks and torches marches towards his home: Yulric doesn’t break a sweat. After all, everything is going according to plan. Right?

Right. Until the witchhunter out there to get him figures this is a far too old, and far too cunning beast he’s dealing with, so he walks an extra mile to imprison Yulric for as long as possible, if not forever. And thus, in our modern times, vampire wakes in a suburban pink house basement, and is greeted by a brand new world. A world where vampires are show stars, attractive, sexy, and bweh – good! A good vampire! Unheard of! He needs to find out who is making these awful creatures, right now! Which just happens to fit okay with the plans of immortality his house inhabitants had themselves, when they were digging him out. Of course, they didn’t expect someone like Yulric: ugly, bony, with jagged sharp teeth and horror for a face. But if he really wants to meet these “vampires“, well, they’re happy to oblige. Especially if it gets him out of their house. Which, apparently, is actually his.

The book is not a parody. It is its own thing, and just happens to mock some other vampiric pop shit we got. I have laughed my butt off reading it, there are so many good jokes, and the fact that Yulric is terrible to behold gives such a wonderful relief of lack of love interest! No love triangles, no sparkly vampires, no overly-handsome… I take that back, there are those, but Yulric made the same face you probably did, when thinking of it. The “ew, what stinks so bad?” face. So anyway, 5 out of 5, goes right to my favs, and I’ll be looking into getting a physical copy. I have to own this. Anyone know the author? I want to thank him.