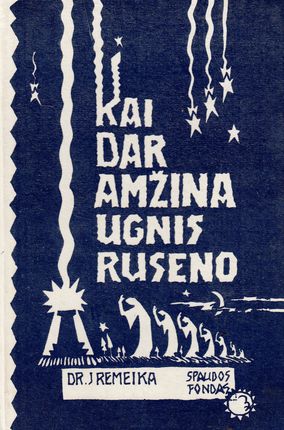 J. Remeika has put together a rare book of Lithuanian folklore called “When the eternal fire still burned“. A lot of what we had is lost due to systematic destructions we survived. And this, sadly, reminds me more of what we lost, than what we salvaged.

About the Book: A collection of short stories from across Lithuania. Most are to par in the style we seemingly enjoy here, calling ourselves the land of the lakes and rain – they’re about how this or that lake appeared there or here and why is it called that way. Some tales are repeated, as if author of this book went to another village and they had their own version. Others seemingly have sequels elsewhere or otherwise connect together. And, of course, each one teaches of the perils that await those who lack virtue.

My Opinion: So what’s my problem, you ask? These here tales are already altered greatly by christianity, even the ones where our thunder god Perkunas is an active participant. There are certain things we didn’t have, didn’t believe in, or had our own version. So it’s a bit unpleasant to read, much like witnessing someone dip sushi into ketchup, I bet.

It’s worth reading it, sure, for the language alone, for it sure changed through the years. But I can only give it 3 out of 5 and no more.

There we go, a truly captivating book. Finished “Mythology: Aztec, Inca, Inuit, and Polynesian myths” by Kelly Mass in one sitting, and then skimmed it for notes again.

About the Book: A very interesting book on Aztec, Inca, Inuit and Polynesian myths and beliefs. Plenty, but not overbearing, explanations and an outline on falsehoods. Short but solid.

My Opinion: I didn’t know even the quarter of the things in this book. It was very, very interesting and informative. Though I would recommend picking up a text book (paper or ebook) right away, since I only did so half-way through. It’s impossible to take notes from audio, as was proved by google not getting what I’m searching for the first two times.

I’m not a big fan of Greek mythology, just because I got oversaturated with it in the past. But “Troy” is a retelling by Stephen Fry, so there wasn’t even a question of whether I’ll read it.

About the Book: As the title implies – book tells us the story of Troy, its rise and eventual fall under the rule of men and gods, equally fickle and vengeful. Heroes rose up for war with only their names to return home, and even the gods likely felt shame and sorrow of what they have done when they looked upon smoldering ashes and blooded streets of Troy that fateful final day. It’s a well told story with no romanticizing of a brutality that is war.

My Opinion: Stephen Fry has a talent to retell very complex stories so that they’re more palatable for people like me. I admire the no-sugarcoating approach too, with the thoughts and notes in between to explain the events.

I feel like Stephen Fry could make any book better. For instance, I don’t really like Greek Mythology due to it so overused in media that it feels more common than my native. But “Heroes” was a marvelous and very fun book that rekindled my interest.

About the Book: The Age of Heroes began, it seems, suddenly. Great people began cleaning out the world of monsters, curses, and scary things from scarier places, making it nice and proper for us to live in. They challenged the gods themselves, took up quests, adventures, solved riddles, and invented things we to this day use. And we ourselves took delight and joy in telling those tales, to our friends, to our children. From Hercules, to Orpheus, to Argonauts, to Icarus, and many, many more.

My Opinion: This is a fascinating piece. Stephen Fry does a great job explaining chronology and errors in it, overlapping and such. He does his best explaining us the relations among people too, how were they connected, who sired whom. The book is well written, tales are told in this light, easy fashion, with comparisons and descriptions fitting our modern world. In fact, once or twice I laughed out loud at some of those. Audiobook is great too, so if you’re new to them, or have troubles getting into them, Fry’s mythology books are a great start point.

Yep, it’s a great book, I give it a 5 out of 5, for making even such a seemingly dull topic – great. (I’m sure it’s not dull, and this is merely the perception of someone who had to study it all in school)