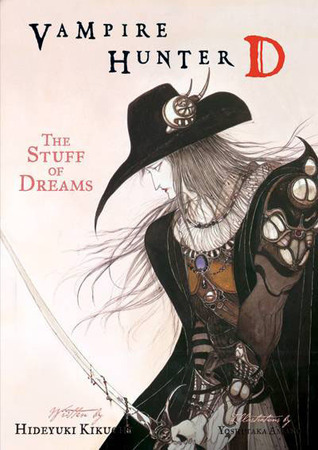 Read Vampire Hunter D: The Stuff of Dreams by Hideyuki Kikuchi, fifth book in the Vampire Hunter D series. While the plots are woven a bit dully, story itself is always different, always interesting, strange, unusual.

About the Book: D is called into a town that is like a haven of safety in an otherwise dreary and dangerous world. Once even Nobility, the vampires, lived here in peace with humans. Once. Now the townsfolk are on their own, and aren’t harboring the best of feelings for the nobility due to one young woman, who, bitten, fell asleep, and slept like this, not aging, for decades. The fact that everyone here dreamed of D at least once makes the hunter wonder if it’s not the sleeping woman herself who called him here, as no one seems to know who else could it have been, or even why.

My Opinion: It’s not an easy read as it’s pretty dull plot-wise. But I do like the strange ideas, all the unusual visuals written. In this book it’s hard to tell what’s real, and what’s a dream, for the tale is a dream within a dream. So you read and try to keep all of the strings in mind, connecting their ends as someone somewhere wakes up or falls asleep. Pretty good if it wasn’t for the horribly gorgeous D who bothers everyone with his mere presence. I’m really looking forwards to his own history crumbs though, as it seems he’ll be related to Dracula.