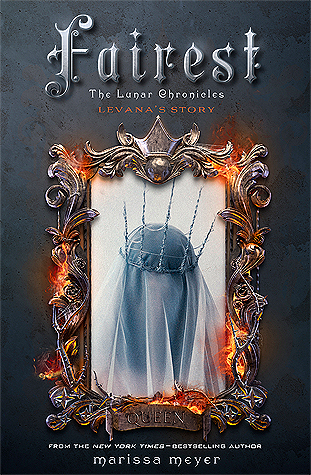 Fairest by Marissa Meyer is a half book from The Lunar Chronicles series, and tells the story of Queen Levana. How a delusional girl who believed in her own lies finally became the Queen.

About the Book: Levana has learned to use glamour due to necessity. Tricked and hurt by her older sister as a child, she barely survived the fire, and was left deformed. Lonely, mocked by her older sister, secondary daughter and not the crown princess, she grew up in a world where illusion was everything, and faked emotion was as good as true. Thus, if illusion face, clear skin, is her reality, why isn’t it reality, period? Who is going to deny her that right? And if they did dare, well… She had glamour powerful enough to force their hearts to love her, and their hands to cut their own throats if she had to.

And so, stepping over broken dreams, dead bodies, and wrecked minds, she made her way up.

My Opinion: Oof, the last time I was so disgusted by a character was when I was reading fifth Harry Potter book, you guessed it, with Umbridge. Yes, there are many reasons why she grew ever crueler, but in all honesty, I think nothing broke her harder than her own lies she spun for herself. Anyway, the book serves not only to steel our hearts against the Lunar Queen Levana, but also introduces us to her stepdaughter, Winter, who is apparently going to be the hero of our next book in The Lunar Chronicles.

Marissa Meyer is unbelievably good. Truly. So this book, as many before, get a 5 out of 5 from me. Damn it was good.

One thought on “book review | Fairest by Marissa Meyer | The Lunar Chronicles 3.5”